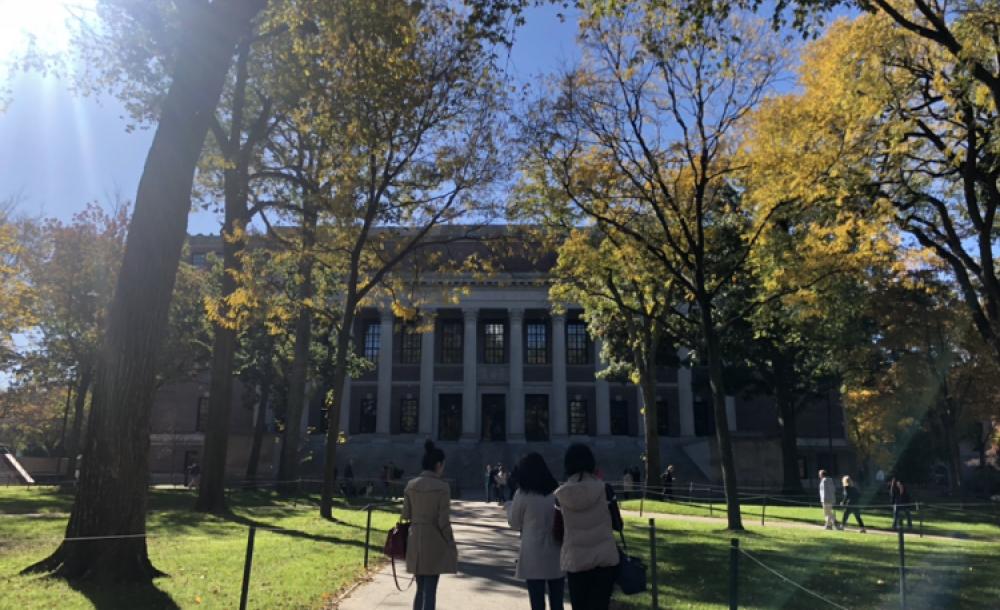 The past couple months in quarantine have forced me to think back on my time there. I’ve reminisced in Snapchat memories, reviewed photo albums, and recently put together a list of my favorite moments, whether it be academic, extracurricular, with friends, traveling, you name it. Let's just say, the list got long, fast.

I realized how many of these moments could only ever happen at a place like Harvard. So many unique, out-of-this world experiences happen because of the sheer opportunity and proximity to amazing people a school like Harvard can give its students.

So in honor of my pre-senior-year-nostalgia, here are just five of the wackiest, most memorable times that have stuck with me.

Making a social experiment video on campus about anonymous compliments, and having the director of marketing and strategy at the Harvard Communications Department contact me to inform me that not only did he love the video, but wanted to help get as many people to see it as possible! The office mentored me on ways to strengthen the editing and marketing, then posted my video on every Harvard social media! It received over 120 thousand views in a week, because they wanted to support what I loved. Crazy.

Performing on the Great Wall of China

My A Cappella group, The Harvard LowKeys, went on an 11 day tour to Beijing and Xi’an, China with the help of a Chinese education company. We arrived and discovered our faces on billboards and rooms in a 5-star hotel. We performed for schools, universities and other large banquets, and I tried more Chinese cuisine than I thought possible. At a particularly fancy event, our group each signed our names on a brand new BMW, which was to be placed somewhere inside the city to commemorate our visit. We topped it off by finding out a year later that our picture is in the US embassy, representing US-China relations. Awesome.

Dreaming Up a Concentration

Since deciding to pursue a joint-concentration between Film and Neuroscience, I knew that I’d face the obstacle of finding other faculty and researchers that would be crazy enough to consider these ideas with me. Then an adviser suggested I meet with Gabriel Kreiman, of the Kreiman Lab. Not only was he willing to take me and my new ideas under his wing, he was just as enthralled by such an under explored and applicable idea. He paired me with a postdoctoral researcher, Jie Zheng, who studies ideas that could easily connect to mine. By next year, I’ll be the first joint-concentrator in Neuroscience and Film from Harvard, and I still don’t know how/why they let me do that. Wild.

This is not a drill. I attended the Hasty Pudding Theatricals event called Man of the Year. The Theatricals are a student organization that puts up an annual musical, and honors both a Man and Woman of the year, who are always big-time celebrities. This year’s Man-Of-Year was Ben Platt! Not only did he come to the afterparty, but years of trying to match his vibrato in the car led to doing the Cha-Cha-Slide and singing radio hits at a college party together. Insane.

The last memory that makes it into my top 5 Harvard moments is a late night in the dining hall, that changed the way I thought about something. I don’t remember the date, or who was there exactly, but that’s because it happened a number of times with a number of people.

My good friend was a world champion in karate at 10 and now writes poems that could move mountains. Another has recently started a business, and is fighting to break the cycle of homelessness. Another discovered a gene in bees that revolutionized the farming industry. They are politicians, mathematicians, and philosophers, yet they are all willing to talk for hours in the dining hall about topics that are just plain interesting. I’ve learned more from late night conversations and over meals than I have anywhere else. Invaluable.

Next Story: The Freedom to Choose (My Courses)